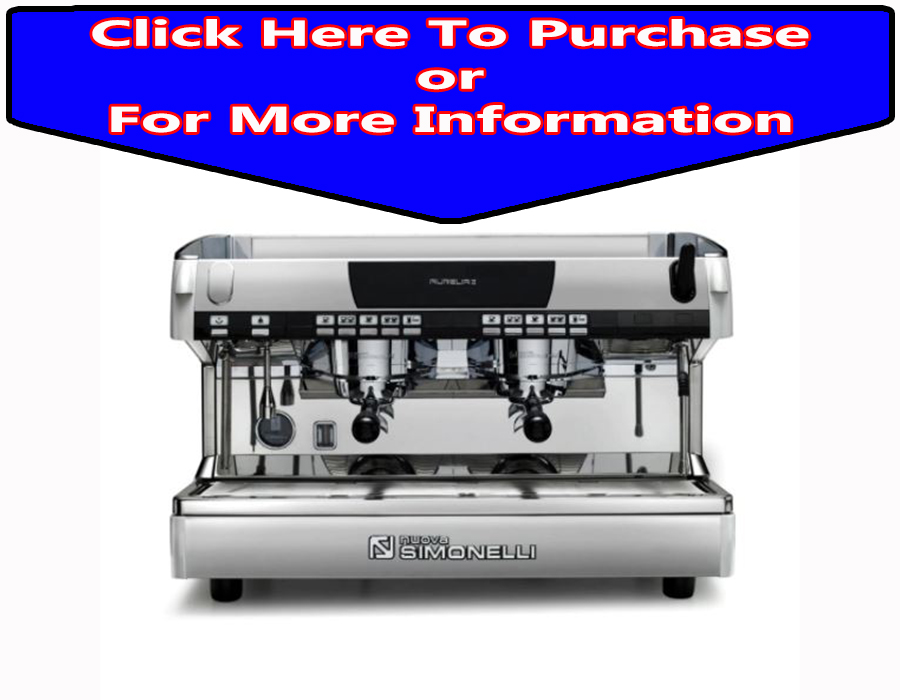 Will the Nuova Simonelli Aurelia II Volumetric espresso machine be a suitable for your enterprise?

In this Aurelia II review, we’ll inform you about everything you need to understand to assist you in assessing whether, in fact, this machine is suitable for your needs.

Not only this, but the Aurelia II is the only ergonomically-certified espresso machine as defined by the famed European Institute of Psychology and Ergonomics. It resembles a masterpiece, providing a solid appearance sitting anywhere in the kitchen or coffeehouse. Dependable, easy to use, multi-functional and premium coffee maker are among the attributes of Nuova Simonelli Aurelia II commercial espresso machine which cannot be challenged by most if not all espresso enthusiasts and baristas alike. Also such a technologically advanced commercial espresso machine as compared to the others might be intimidating at first for any new consumer It may seem hard to use but it’s quite the opposite. It’s actually very simple to use once a user gets accustomed to it.

What You Will Get Out Of This Review

By the time you are finished reading and/or watching the above video, you’ll understand the following:

Volumetric dosing simply means programmable quantities for espresso shots. As a business owner, you’ll be in a position to guarantee quality consistency, because only perfectly calibrated espresso shots will be pulled all day long.

To use this feature, the barista sets the espresso volumes and the machine automatically dispenses espresso beverages at the set programmed volumes for the remainder of the time that shots are being pulled.

This translates to more time freed up to begin preparing other beverages in a queue or spend the type of face-to-face time with patrons that establishes a faithful following.

The only Aurelia II device that does not incorporate volumetric dosing is the Aurelia II Semi Automatic (it has manual dosing).

Group Heads That Are Raised

Does your enterprise sell espresso drinks in several different sizes? Considering a machine with elevated group heads like the Aurelia II designs will accommodate a quicker production line.

Baristas will be in a position to brew straight into little or tall cups, sparing the additional step of brewing into shot glasses and then switching to a cup.

This technique of brewing additionally makes it simpler to preserve that ideal layer of crema that aficionados expect on an espresso. Though talented baristas can meticulously move espresso from shot glass to cup, it’s easy to damage the crema and degrade the quality of an otherwise superb espresso.

Infusion System That Is “Soft”

The Soft Infusion System designed into the Aurelia II machinery is among the attributes that makes this machine so sophisticated.

It is a pre-infusion system that wets the ground espresso before discharging a pressurized water flow for even extraction, thoroughly introducing flavors and generating flawless crema.

The Soft Infusion System additionally gives a safeguard against inadequate espresso tamping. Experienced baristas commonly do practice tamps occasionally throughout the day, but this system lessens the need for this manner of manual “recalibration” and guarantees a greater quality product.

Touch Wands That Remain Cool, Even When Steaming Milk

This is like a free gift to your baristas. No more burns on a scalding steam wand. The Cool Touch Wand is manufactured to remain at a good, cool temperature, even while steaming.

On top of creating a safer situation for your baristas, the Cool Touch Wands facilitate simpler cleansing, as milk crusts won’t develop and create additional effort.

The push-pull steam trigger is designed to enable fluid movement while steaming milk. In place of clunky knobs and levers that will wear on your baristas’ hands and wrists, the Aurelia II machines have a simplified switch that can be tapped into on and off positions for ergonomic steaming.

This is a good attribute for baristas who spend long hours on the espresso machine. The more intuitive the design, the more efficient your baristas can be.

With a rear plate that doubles as a mirror, Aurelia II machines enable baristas to observe every angle of espresso output to watch for quality and accuracy.

A reverse mirror can be utilized in tandem with processes like volumetric dosing and pre-infusion to guarantee that the espresso is of optimum quality. And if it isn’t, the visual signals will assist baristas in isolating issues for correction swiftly and effectively.

Part of budgeting for your operation—or for your dwelling—is determining power consumption. This may seem like a minor thing, but the Aurelia II’s energy-saving capability can add up to substantial dollars saved over time.

Another benefit of electricity preservation accompanies the use of several electrical devices. There’s less concern that you’ll completely sap your electrical ecosystem, which frequently occurs at the worst imaginable time (like in the midst of a rush).

How To Make A Hot Buttered Latte (No Rum Needed)!

How to Clean and Maintain a Home Espresso Machine

How To Make A Macchiato

How To Grind Coffee Beans Without A Grinder…6 Different Ways

This website uses cookies to improve your experience while you navigate through the website. Out of these, the cookies that are categorized as necessary are stored on your browser as they are essential for the working of basic functionalities of the website. We also use third-party cookies that help us analyze and understand how you use this website. These cookies will be stored in your browser only with your consent. You also have the option to opt-out of these cookies. But opting out of some of these cookies may affect your browsing experience.
Necessary Always Enabled
Necessary cookies are absolutely essential for the website to function properly. This category only includes cookies that ensures basic functionalities and security features of the website. These cookies do not store any personal information.
Non-necessary
Any cookies that may not be particularly necessary for the website to function and is used specifically to collect user personal data via analytics, ads, other embedded contents are termed as non-necessary cookies. It is mandatory to procure user consent prior to running these cookies on your website.
SAVE & ACCEPT